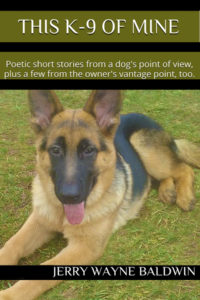 While checking messages and posts on Faceboook, my owner, Shelley, came across a poem in a dog group that really moved her. Then she found another. In just a few moments she had laughed and cried. This author was in several dog groups she followed. She doesn’t care for poems, but these were more like poetic short stories about dogs.  And she loves dogs!  Especially me!

She felt compelled to tell the author how good the poems were and to suggest he publish a book about them.  She wanted to read more! So, she struck up a conversation with Jerry Wayne Baldwin. When she spoke with him, she said these poetic stories are so good, you should write a book.  He responded with a link to his ebook, This K-9 of Mine.  She felt a bit silly at that point. Of course, someone this talented would have a book!

Let me have Knuckles tell you about it.  He is on the cover.

As she conversed in messenger with this stranger, she discovered he not only had a dog, but three dogs, Archibald, Knuckles and Kipper.

Archibald Sky (Archy) is a  Black and White Border Collie that excels in agility and frisbee.

Knuckles is a West German Working Stock German Shepherd and is pictured on the cover of the book.

Kipper is a Red and White Border Collie who excels in waking the household up at 4 a.m. to herd imaginary sheep!

Jerry also has a couple of cats and three sons.

Jerry mentioned he had the ebook, but would really like to have a paperback version. He has followers all over the world and they wanted a book to hold in their hands. Unfortunately, publishing a paperback through Amazon was a bit mystifying to him. Without thinking, Shelley blurted out, “I can help you!” She always likes to help people and she thought this shouldn’t be too hard. She later learned differently.  Amazon is a great place to buy items, but making a book was a bit more of a challenge. She has several websites, this one of course, Trixie Tells All that features me and one about How to Achieve Financial Success and another she will mention in a bit. She may need to know how to create an ebook or paperback through Amazon one day for herself concerning those websites, so she thought she could learn and help at the same time.

Jerry gave her the specifics and so began a new friendship. She started collecting his poems and preparing them for submission. He had quite a few and even more than what was published in the ebook. They decided to complete the paperback and then update the ebook. As they spoke, Shelley learned more about this new friend that shared her love of dogs.

In addition to creating poems about our lovable furry friends that are enjoyed worldwide, Jerry also creates spirit filled devotional poems. A new book titled, God’s Ways in 60 Days, with scriptured based poems is in the works. (Follow Jerry to be notified when more dog poems are published and be on the lookout for the new devotional book.) Besides being a talented writer, Jerry plays guitar and accompanies his youngest son, Zach. who is very gifted in his own right on the piano. They can often be found providing their music ministry at nearby churches and volunteering their talents at local retirement homes, homeless shelters and at other places and events around Roanoke, VA in their Christian music group called Healing Reign. Follow them on Facebook  and listen in on a watch party.  Jerry’s oldest son, Aaron, is in college and his middle son, Josh, is the athlete of the family and after a layoff is playing football is senior year.

The paperback book was recently published and is a favorite of many readers.  Here is what a few had to say:

I love this author’s point of view. I enjoyed this book so much I bought 2 more copies for my dog loving friends.

If you have a dog, this is a book for you. The poems can simultaneously bring a smile and a tear along with them. If you’ve ever stopped and looked at your best friend laying next to you and were overwhelmed with how much you love them, you’ll love this book.

I laughed, I cried and smiled all the way through this book! Short read. So worth the money. Want to share with so many people. Buy this book!! It’s one of the cutest books written. I promise!

Amazing writer. Beautiful stories about dogs that we can all relate to. Will bring a smile to your face and tears at the same time. But happy tears. A must read.

Once you read it, you will agree! Click on the link below to order your copy today!

Hi,  I’m Trixie!  I love treats, sleeping, chewing up my toys and I especially like chasing small critters that enter my yard.  (Don’t worry, my mom makes sure that I don’t catch any of them.)  I was rescued when someone dumped me at the driveway, pregnant with 10 little puppies.  Though my mom had dogs as a kid, she realized there was a lot she didn’t know.

We decided to create this website to help you with issues that you may not be aware of and to share information about the best foods, toys, treats, and places to explore with your fur friend. You’ll learn all about raising your dog to be happy and healthy and we will have some fun along the way!

If you want to find out how my mom makes money from home so she can spend more time with me, just click here.

2 Reply to “The Best Poetic Short Stories About Dogs”

I’m Trixie. Welcome to my page!

What Will You Learn From My Stories?

Then read on and discover all of this and more!

If there is a question you have that hasn’t been answered, just drop me a note and I will ask my owner if she has an answer for you.  Don’t be afraid to ask.  Someone else may be wondering about the answer too.

Stay Up To Date

Your Dog Doesn’t Need to Suffer in Pain 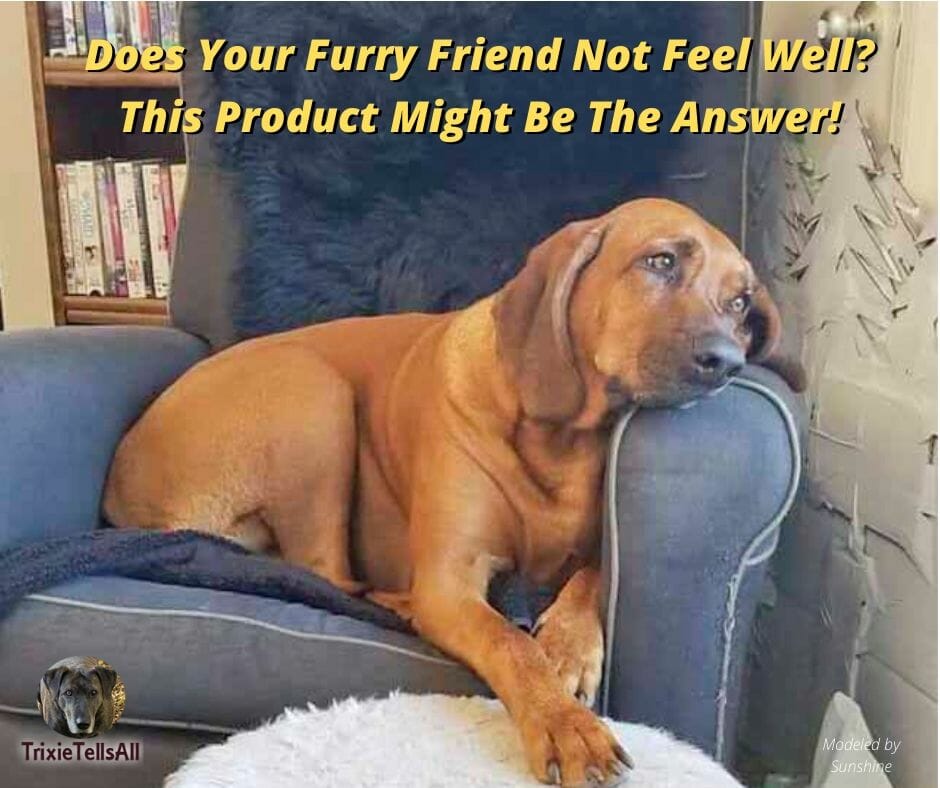 Trixie Tells All 2021 . Powered by WordPress